Congratulations to the following coaches who have been selected as the Week 16 WHoopDirt.com Coach of the Week presented by Capital Elite Agency. These coaches are now eligible to receive the WHoopDirt.com National Coach of the Year Award presented by Capital Elite Agency which will be announced at the conclusion of the 2021-22 college basketball season.

The Week 16 winners are: 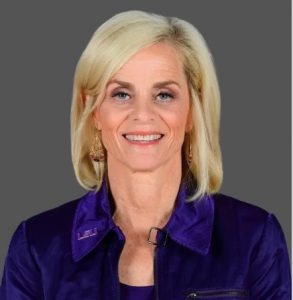 Guiding her squad to two more impressive victories to close out the regular season this week, Coach Mulkey has completed the largest turnaround by a first-year coach in SEC history. The then-No. 8 Tigers, coming off a 9-13 season and picked to finish eighth in the SEC during the preseason, defeated Alabama by a score of 58-50 in their final home game of the season on Thursday. LSU then concluded the regular season with a 57-54 road win over No. 16 Tennessee on Sunday. With the victories, Mulkey’s squad heads into postseason play ranked 6th in the nation with a record of 25-4 (13-3 SEC). Prior to this year, the Tigers had not won 25 games in the regular season the 2007-08 campaign. As the 2-seed in the SEC Tournament, LSU will play the winner of Kentucky-Mississippi State on Friday night.

In her first year at the helm, Coach Washington has led Lincoln to its first ever CIAA Tournament Championship.  As the CIAA’s top seed, Lincoln faced off against 8th-seeded Winston-Salem State in a quarterfinal matchup on Wednesday. The Lions found themselves in a tie game entering the fourth quarter, but were able to come away with a 70-66 victory and advance to the semifinals on Friday. Lincoln was able to take care of business against 12th-seeded Livingstone, leading by 16 at the half en route to a 74-48 triumph and setting up a matchup with 2-seed Elizabeth City State in Saturday’s Championship game. The Lions used a strong fourth quarter to pull away from ECSU, securing a 67-52 victory and a National Tournament berth. Lincoln (22-7, 12-4 CIAA) will find out who it matches up against in the first round of the Tournament on Sunday night.

Coach Hersey’s Pioneers cruised through the NEWMAC Tournament this past week, picking up a pair of 20+ point victories. Top-seeded Smith, ranked No. 17 in the nation at the time, outscored 4th-seeded WPI 21-4 in the second quarter of a 63-35 victory in Friday’s semifinal matchup. Returning to action on Sunday, the Pioneers put on another strong defensive performance, holding No. 2 seed Babson to just 26.5% from the field in a 68-46 triumph to claim the Tournament Championship and secure their third consecutive National Tournament berth. Now 23-2 (9-0 NEWMAC) on the season and riding an eight-game winning streak, Smith will host Framingham State in the first round of the National Tournament on Friday night.

Coach Wagoner guided Reinhardt to four wins in six days to capture the AAC Tournament Championship this past week. The Eagles, who entered the Tournament as the 5-seed, jumped out to a 17-point first quarter lead and never looked back against 12th-seeded Brenau on Monday, coming away with an 88-71 victory. Returning to action on Thursday, Reinhardt held 4-seed Tennessee Wesleyan to just 10 made field goals (10-55, 18.2%) in a 63-42 triumph. The Eagles then faced off against 9th-seeded Bryan in the semifinals the following day, taking a convincing 77-64 victory and advancing to the Championship game. Matched up against No. 2 seed Milligan, Reinhardt was able to secure a 72-57 win and the Tournament Championship thanks largely to a 22-4 second quarter. Now 20-13 (15-9 AAC) on the season, the Eagles enter the National Tournament riding a nine game winning streak. They will find out their first round matchup on Thursday evening. With four more victories this past week, Coach McMahon and Edison State were able to complete a perfect regular season. The 18th-ranked Chargers opened the week with a pair of blowouts – defeating Clark State 99-36 on Monday and Terra State 101-44 on Wednesday. Edison State’s final two contests were more closely-contested, as the Chargers picked up an 88-80 victory over Bryant & Stratton on Saturday and an 86-78 victory over Lakeland Community College in the regular season finale the following day. The 27-0 Chargers averaged 96.1 points per game and took all but three of their victories by double-digits in what was a dominant regular season.