Congratulations to the following coaches who have been selected as the Week 14 WHoopDirt.com Coach of the Week presented by Capital Elite Agency. These coaches are now eligible to receive the WHoopDirt.com National Coach of the Year Award presented by Capital Elite Agency which will be announced at the conclusion of the 2021-22 college basketball season.

The Week 14 winners are:

With two more wins this week, Coach Schneider has guided Kansas to its first five game winning streak in Big 12 play since 2000. The Jayhawks defeated West Virginia in Morgantown for the first time since 2013 on Wednesday, out-rebounding the Mountaineers 48-30 and coming away with a 65-47 victory. Returning home on Saturday, Kansas again dominated on the glass, out-rebounding Kansas State by 17 en route to a 63-51 triumph in the Dillons Sunflower Showdown. The 17-5 (8-4 Big 12) Jayhawks now have eight conference victories on the season – their most since the 2012-13 campaign. They are back in action tonight, when they host West Virginia in a rematch of Wednesday’s showdown.

Coach Pickens guided Ashland to another pair of road victories this week, as the Eagles extended their winning streak to 19. Ashland, ranked No. 1 in the D2SIDA Poll and No. 2 in the WBCA Coaches’ Poll, kicked off its week on Thursday by forcing Trevecca Nazarene into 35 turnovers in an 86-41 triumph. Back in action on Saturday, the Eagles trailed Kentucky Wesleyan by as many as eight in the second half before using a third quarter run to take control, and eventually come away with a 76-71 victory. Now 22-1 (17-0 Great Midwest) on the season, Ashland will look to make it 20 straight when it faces off against Walsh at home on Thursday evening.

Two more victories this past week have Coach Broderick’s Captains just one game away from completing a perfect regular season. Top-ranked Christopher Newport won its first game at the C2C Classic in Fredericksburg, Virginia, on Saturday, defeating UC Santa Cruz by a score of 74-70. The victory was just Christopher Newport’s fifth of the season that came by single digits. The Captains then faced off against Pratt Institute the following day, outscoring their opponent 28-2 in the third quarter of a 90-30 victory. Christopher Newport forced 30 turnovers and held Pratt to just 22.7% from the field in the contest. Now 21-0 on the campaign, the Bobcats next contest comes at home against Salisbury in the regular season finale on Saturday.

Coach Fleming guided Columbia International to four impressive victories in a span of just six days this past week. The Rams took down Columbia College by a score of 72-63 on Tuesday, before picking up a dominant 85-47 triumph over Johnson the following day. Back in action on Thursday, Columbia International trailed a tough Tennessee Wesleyan squad by five entering the fourth quarter, but outscored the visitors 23-2 in the final 10 minutes to come away with a 70-54 victory. The Rams then picked up their fourth consecutive victory with a hard-fought 71-67 win at Brenau on Saturday afternoon, marking the longest winning streak under Coach Fleming’s tenure. After a loss yesterday, Columbia International is now 13-14 (11-11 AAC) on the season. Its next contest comes on the road at Montreat on Wednesday. 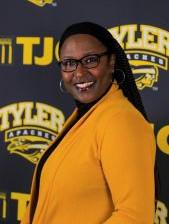 Coach Hoard picked up her 500th career victory this past week as her Tyler squad won another pair of contests. The then-No. 8 Apaches defeated Kilgore on the road by a score of 75-72 on Wednesday, marking the milestone in Coach Hoard’s career. After another victory on Saturday (93-59 vs. Paris JC), Hoard has now compiled an impressive career record of 501-204 in her 22 years with Tyler. Her Apaches are now 22-4 on the campaign, and have earned 17 of their 22 victories by double-digits. They moved up one spot to No. 7 in the latest NJCAA DI Top 25 Poll, and will travel to take on Angelina on Wednesday evening.